If you have any news (including reports, photographs, personal experiences, celebrations, awards, or recollections) that you would like to share with other Seniors, please email seniors@stleonards-fife.org and we will be in touch. 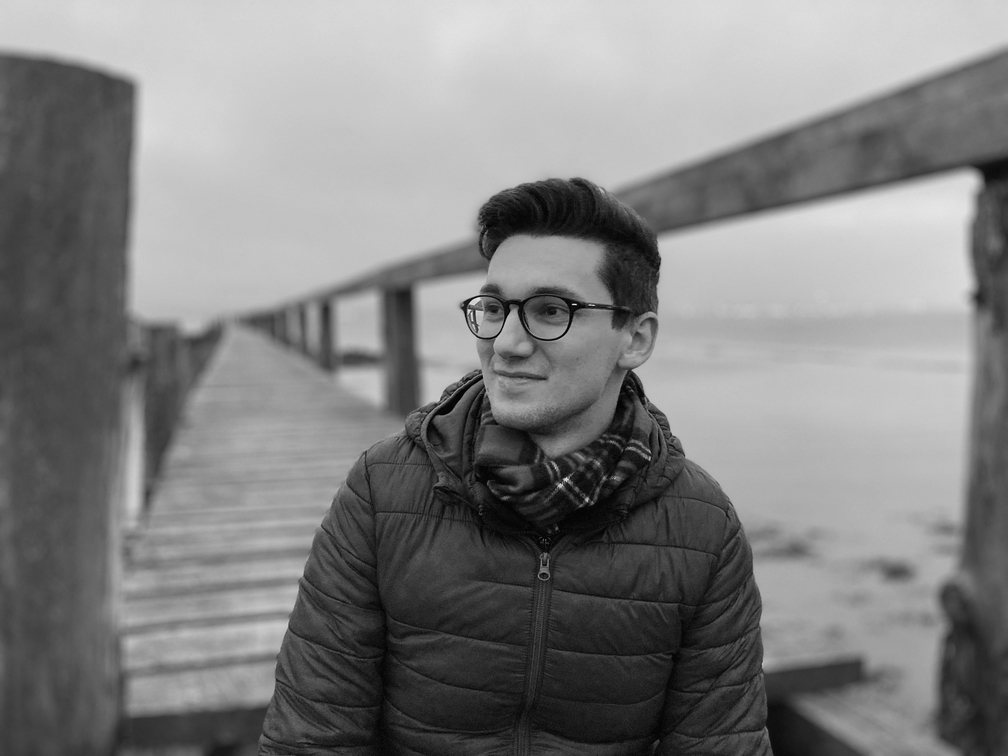 St Leonards Senior Anthony White FRSA SMISM (2017), a multimedia and choral composer, conductor, organist, and undergraduate music student, has not let the pandemic hinder his love for conducting, composing, and creating music. Indeed, over the past twelve months, Anthony has been involved in an impressive range of interesting and innovative projects, gathering musicians from across the globe to produce stunning virtual performances which have cheered the spirits of both participants and audiences.

Anthony completed his International Baccalaureate Diploma at St Leonards in 2017, and was involved in both instrumental and choral ensembles, thus making a significant contribution to the flourishing academic and cocurricular musical scene at St Leonards. Upon graduation, Anthony moved to Aberdeen to study for an undergraduate degree in Music, and he is currently finishing his third year of the programme.

Last year, together with his friend and colleague Harvey Stansfield, an organ scholar at Coventry Cathedral, Anthony founded a virtual choir named ‘Vox Ex Animo’ as well as an instrumental group. The choir produced a number of collaborative performance videos, the highlight being a virtual Evensong for Blackburn Cathedral and the Diocese of Blackburn.

This year, in addition to his academic studies, Anthony has composed two pieces of music which are of particular note: first,  a multimedia composition entitled ‘The Wonders of our Planet’ to mark Earth Day 2021; and secondly, ‘Trumpet Tune’, a short solo organ piece. He has also worked on a number of large musical projects in the role of producer, namely ‘Song of the Ocean’. The first project is a collaboration between science and the arts intended to raise awareness of the ocean. The music for this project was composed by Paul Mealor, best known for his composition ‘Ubi Caritas’ which was performed at the Royal Wedding in 2011. The project has recently received official endorsement from the United Nations as a UN Decade Activity, and will premiere on World Oceans Day next month. Anthony also produced ‘Grand Choeur Organ Spectacular’, a virtual concert which brought together  performers from across the world seeking to raise awareness of the widespread impact of the pandemic of mental health. The concert was held in honour of Mind and Young Musicians UK. Last, but by no means least, Anthony recently received his first IMDB credits for a soundtrack he composed for Druid (2020), a film by Karolina Smolova.


We are immensely proud of Anthony’s achievements, and look forward to watching his exciting musical career unfold over the coming months and years.

To watch some of the aforementioned performances, please follow the links below:

A composition for Earth Day, by Anthony White

This year, 2021, marks the bicentenary of the birth of Old Tom Morris. He was born on 16 June 1821, in St Andrews. To mark this anniversary, Jane Claydon, former Deputy Head of St Leonards, was asked by the St Andrews Preservation Trust to produce a booklet about Tom's forgotten course at St Leonards.

The Tom Morris 9-hole golf course at St Leonards was laid out in 1893 and, according to a previously overlooked entry in the St Leonards Gazette, discovered recently by Jane, a suggestion made by a Senior may have been the catalyst for the provision of this course, even outlining its location - in the field below the cricket pitch. That Senior was Edith Bruce Johnson, who was born in 1886 and entered St Andrews School for Girls in Queen Street in 1880. She completed her studies at St Leonards in 1882, aged 16.

There is no evidence so far to suggest that Edith, herself, was a golfer and, as the St Leonards Gazette did not begin until 1887, no records of games were kept at that stage. 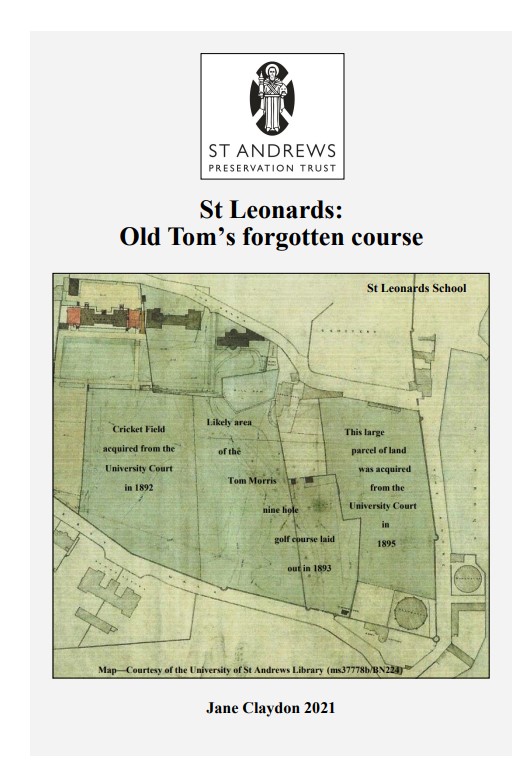 St Leonards has a rich sporting heritage. Perhaps most famously, the school is known as the 'cradle of lacrosse' - the first game of ladies' lacrosse was played on St Leonards Grass in 1890. However, pupils, past and present, have represented the school nationally and internationally in a range of other sports including small-bore rifle shooting, rugby, and hockey.

St Leonards Seniors were instrumental in the founding of the Scottish Women's Hockey Association in 1901, and were also key players in the first Scottish ladies' hockey international, which took place on Irish soil on 13 April 1901. Ten members of the Scottish team were current or former pupils of St Leonards.

St Leonards produced a number of other formidable hockey players around this time, including Edith Clapham (SLH 1895-97), Helen Carver (BE & SRE 1894-1898) both of whom played for England.

Pictured are a team badge and scarf are in the SLSS Museum and, interestingly, there is another St Leonards connection in these artefacts: the embroidered badge was designed by a fellow Senior, Mabel Seeboam. 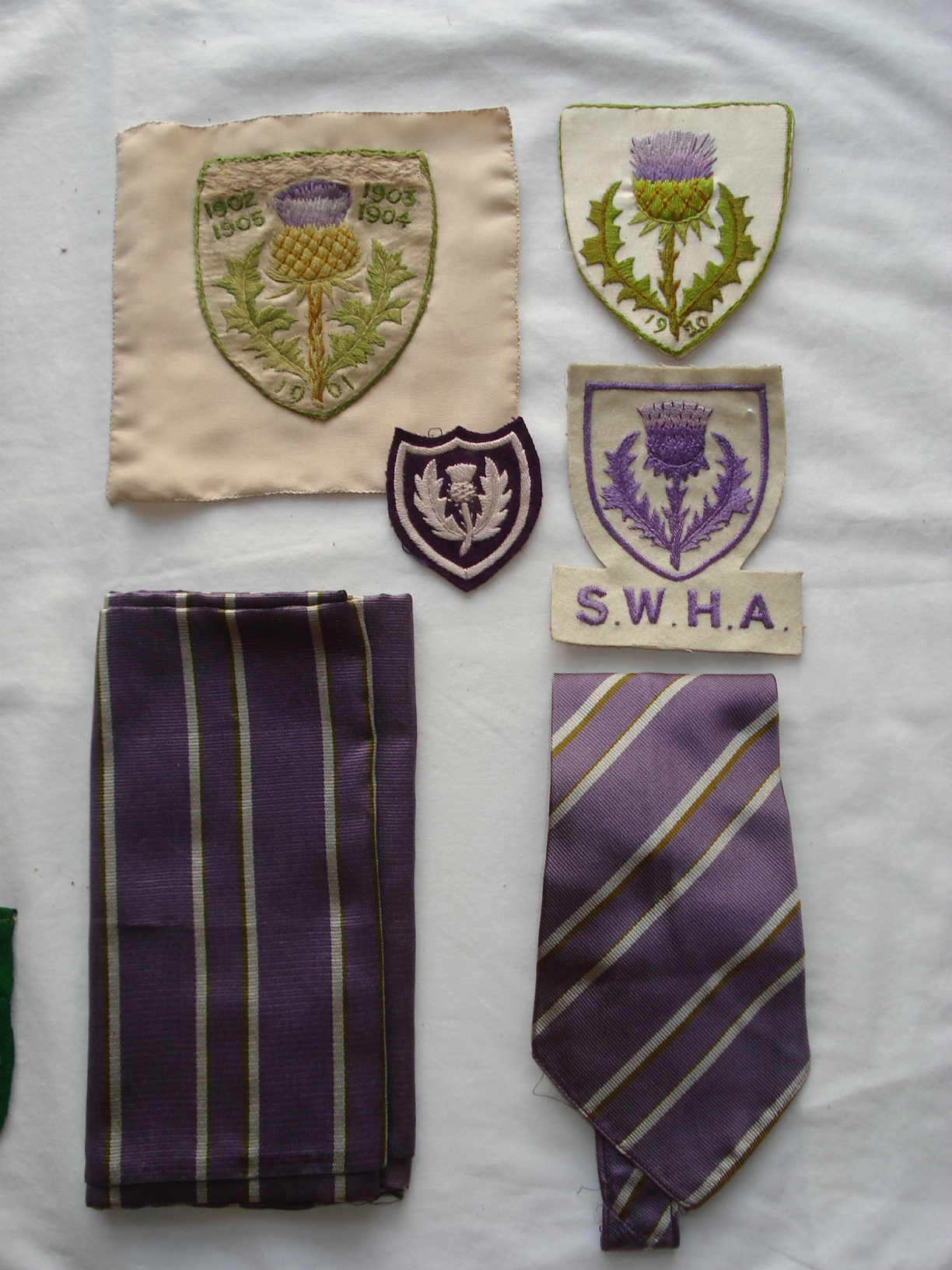 At the end of last year, St Leonards Senior Mary Vavra née Raine (1952-57, SRE), featured on BBC Sporting Witness, which covers the inside and personal stories behind key moments from sporting history.

Mary Raine was the first female journalist to report on football for the BBC, in 1969. Mary had been a football fan and avid Sunderland supporter since childhood, and accordingly, her enjoyment and knowledge of the game was extensive. Her passion for the sport never diminished, despite never being allowed to play with the boys and being ordered to take down her football paraphernalia by the Housekeeper ('HS') in St Rule East.

After she left St Leonards, Mary went on to work briefly as a teacher before becoming a political journalist for the BBC. Although she specialised in politics, her knowledge and passion for football meant that she was asked to cover a first division match between Chelsea and Sunderland on BBC Sports Report. She received positive feedback from football fans who recognised her fantastic knowledge of the game and. Whilst Mary never professionally moved into sports journalism, she still retains a love of football. 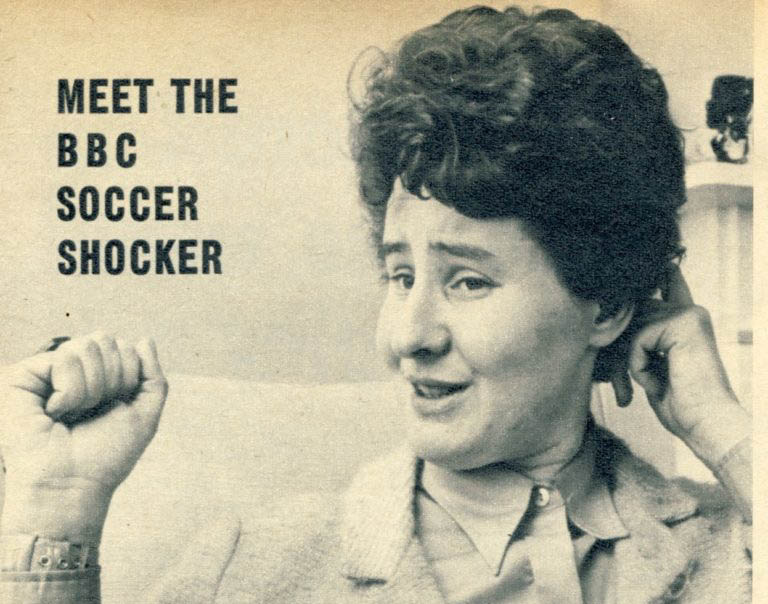 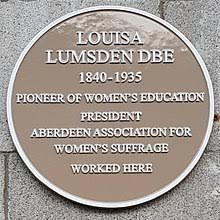 has had a plaque unveiled in her honour in Aberdeen. She was a pioneer of women's education, a suffragist and also the first Headmistress of St Leonards.

Louisa Lumsden was born in Aberdeen in 1840. She was one of the first five students to be educated at Hitchin Women’s College, later Girton College, Cambridge. She then taught at Cheltenham Ladies' College before moving to St Andrews to become the first Headmistress of St Leonards, in 1877.

In 1895, she became the first Warden of University Hall at the University of St Andrews and, in 1908, became President of the Aberdeen Suffrage Association.

The plaque is located on 214 Union Street, the former branch of the local Suffrage Association, and was unveiled on Wednesday, 18 January 2020. Councillor Lesley Dunbar commented that it was "good to honour Louisa Lumsden as a well-respected and well-known local suffragist in the city who also campaigned peacefully with local women for women to win the vote."

Lady Rhondda was a political activist and business owner. She grew up at her family home, Llanwern, outside Newport, and then attended boarding school - first at Notting Hill High School, and then St Leonards.

Early in her life, she joined the suffragette cause and became secretary of the Newport Branch of the Women's Social and Political Union. She was director of 33 companies, founded the Six Point Group (which pressed for changes to laws regarding child assault, unmarried mothers, equal pay, and widowed mothers), and founded the political and feminist magazine Time and Tide, the first editor of which was fellow Senior, Helen Archdale.

At present, there are no statues of historical, influential women in Wales. The Monumental Welsh Women Campaign is seeking to change that by raising funds for five statues of prominent women to be erected across the country. Last year, the Welsh people voted on which women should be commemorated as part of this project. Lady Rhondda was one of the influential figures chosen. The proposed statue will be situated in the city of Newport, Gwent.

The Monumental Welsh Women campaign are seeking to raise £80,000 to gain planning consent, commission an artist, produce and install Lady Rhondda’s statue.If you would like to contribute to Lady Rhondda's statue, please click here 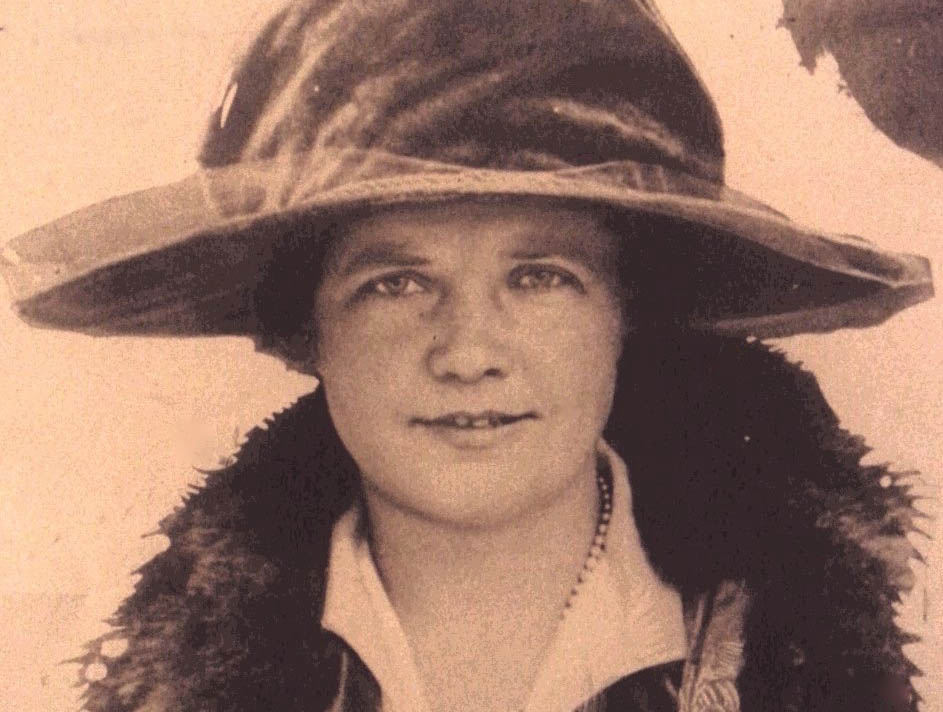 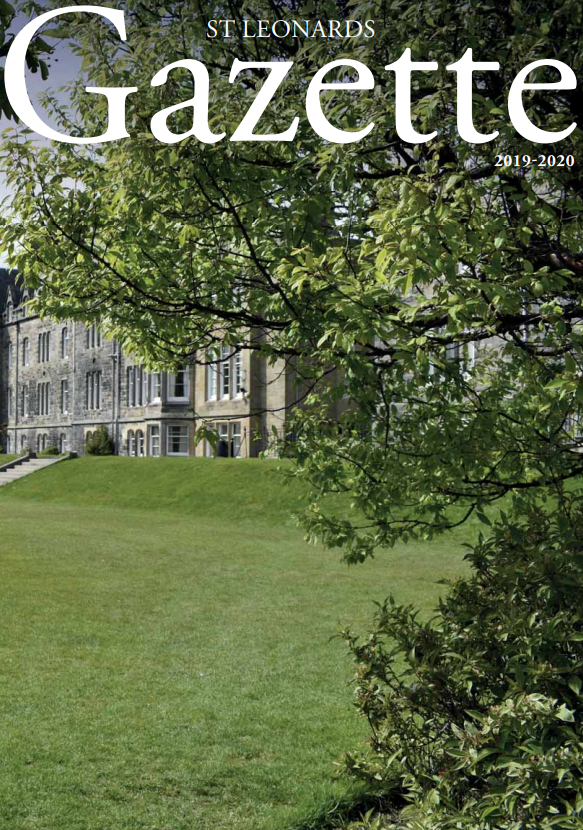 After the highly successful relaunch of the St Leonards Gazette in 2018, we are pleased to announce the publication of the new edition, covering the 2019-20 academic year.

Going forward, the Gazette will continue to be produced annually by the School. If you would like to receive a copy, please contact the Seniors Office at seniors@stleonards-fife.org

Come and see our vibrant school, and meet our friendly pupils and staff More

Stay at St Leonards for the 150th Open Championship, with rooms available to let in our three recently refurbished boarding houses in July 2022. More