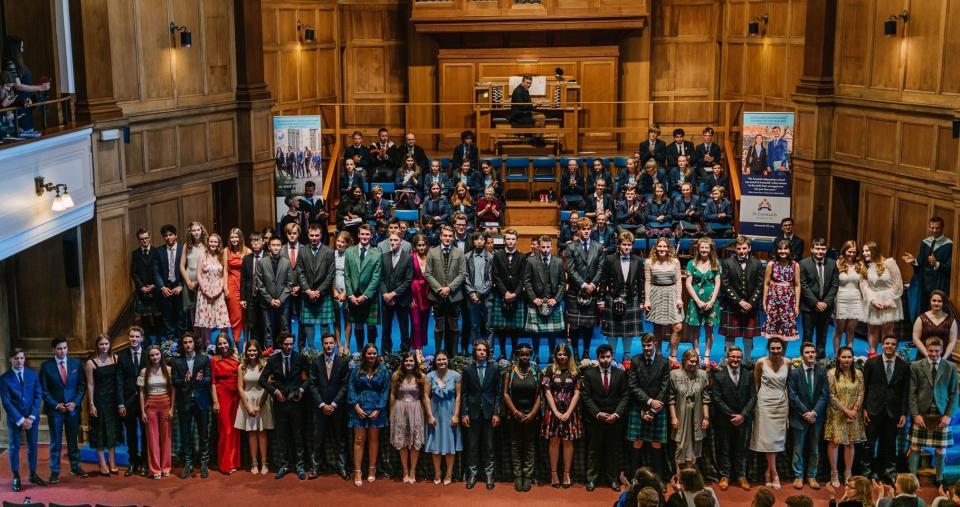 Praised for strong academic achievement in the Sixth Form, St Leonards is Scotland’s Independent School of the Year 2019, named by the Sunday Times Schools Guide.  It is the first school in Scotland to be accredited as an all-through IB school, delivering the inspiring globally-recognised curriculum from Year 1 through to Year 13.

This year, two of our final year students achieved an impressive 44 points, placing them amongst the highest-ranking candidates worldwide. Typically, only 800-1000 candidates out of the 185,000 sitting the IB exams achieve this near perfect score.

Aenghus McGregor, from St Andrews, who achieved and exceeded both of his university offers, has accepted a place at the University of York to read Curating and Art History.

Hannah Cooney, Deputy Head Girl at St Leonards, also achieved 44 points in the IB Diploma. Hannah, who is from Berwick-Upon-Tweed, Northumberland, and boarded at St Leonards during her studies, has also been accepted to her first-choice destination, Durham University, to study a Combined Honours Degree in Social Sciences.

Other high-scoring candidates included local student Calum McKinney, who is going to the University of St Andrews to study Marine Biology, with an IB points score of 38, and Tom McBarron from St Andrews, who scored 41 points and has secured a place to study History at Durham University.

Head Girl Eve Wedderburn, who lives near Cupar, also exceeded the entry requirements for her first-choice destination and is looking forward to starting her degree in Philosophy, Politics and Economics at the University of Warwick later this year.

The most popular destination for St Leonards leavers this year is Durham University. Head Boy Harry Mercer, who signed with the Scottish Rugby Union last year, is amongst the students accepted to Durham. Harry, who will study Anthropology and Sociology, has also been offered a coveted rugby scholarship at the university, allowing him to continue to grow his game.

Other UK destinations this year include Exeter, UCL, Nottingham, Aberdeen and Glasgow, whilst international universities include IE University, Spain, Glion Hospitality Management School, Switzerland, the University of Technology in Sydney, and ESADE Barcelona.

Dr Michael Carslaw, Headmaster at St Leonards, said: “I am delighted with this year’s International Baccalaureate results. Students have achieved comfortably above the global average points score, going on to study at top universities in Scotland, the UK and abroad.

“The range of destinations grows year on year, with students choosing universities from Aberdeen to Exeter, Durham, Edinburgh, St Andrews and further afield to Switzerland, Sydney and Spain. I find it invidious to single out too many individuals because I am equally proud of all candidates. For some, passing the Diploma has been as much a personal triumph as those achieving 44 points. Congratulations to our 2019 IB graduates.  We wish them all the very best for the next stage.”