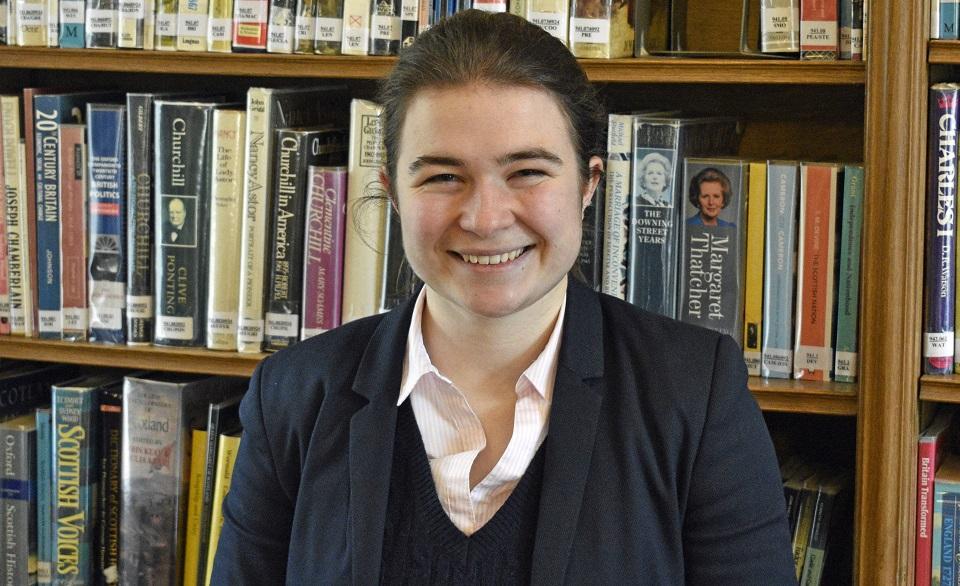 The English Department recently received the fantastic news that Eleanor Greenwood (Year 12) had been selected as a runner-up in the prestigious Scottish Schools’ Young Writer of the Year competition.

Eleanor’s entry, which was originally submitted as a written task for her IB Diploma Language & Literature course, looked at the trolling of the BBC’s political editor Laura Kuenssberg. The competition required writers aged between 15 and 18 to demonstrate a strong voice and express opinions and Eleanor’s stand-out piece of non-fiction writing did just that.

She received sparkling feedback from the judging panel, made up of eminent authors, journalists, actors and critics, including the writer and poet Donald S Murray, who described Eleanor’s work as ‘a remarkable piece of writing at any age. Stylish and lucid throughout. Builds well to its conclusion.’

Journalist and fellow judge Barbara Miller described it as ‘a very polished piece of crisp, authoritative writing, with an extremely powerful introduction and a succinct punchy pay-off’, adding that Eleanor’s submission constituted ‘an exceptionally mature piece of journalism’.

Mrs Samuel, who encouraged students in her IB Diploma class to enter the competition, said: ‘Eleanor is a very diligent and talented member of my class. It is wonderful that Eleanor is particularly interested in real-life, non-fiction writing and she can look towards a bright future as a journalist.’

Anyone who is interested in entering next year’s Scottish Schools’ Young Writer of the Year competition should speak to Mrs Samuel or another member of staff in the English Department. There is still plenty of time to conjure up ideas for entries, with the deadline set for December 2018.

Eleanor’s full article is published below:

‘A state of depression’

The recent intimidation of Laura Kuenssberg, the BBC's political editor, reveals much about the changing nature of political life in Britain today. The explosion of media platforms and networks of instant communication is transforming not only the behaviour of politicians; it is also transforming the treatment of journalists.

In this post-truth age, where public figures are held in low regard and trust in the integrity of politicians has been undermined, a new phenomenon has emerged, the unwavering support given to certain charismatic figures from online communities. Like devotees who remain blind to a guru's failings, they refuse to accept any criticism of their leader and threaten anyone who dares to question their policies or decision-making. In the Twittersphere, trolls can take advantage of their anonymity and say what they want, confident that they will not be identified or tracked down. They may hide in the virtual Cloud but their comments have real consequences.

The conflict between Ms Kuenssberg and the Corbynistas began following an interview she conducted with Jeremy Corbyn following the terrorist attacks in Paris in November 2015. Some of his most fervent supporters felt that Ms Kuenssberg had overstepped the mark in her line of questioning and indeed one formal complaint relating to the BBC's accuracy and impartiality rules was upheld. The criticism resurfaced during her coverage of the 2016 Labour party leadership contest and a petition calling for her to be sacked reached 35,000 before it was taken down.

Ms Kuenssberg received many threats during the General Election campaign in June 2017 over alleged bias in her reporting of Corbyn’s activities and speeches. A pattern has therefore developed. Just as every major political occasion affords greater exposure to the BBC's political editor, so it provides another opportunity for Ms Kuenssberg to be abused online in the vilest possible terms.

The relationship between politics and social media is changing all the time. Many politicians have embraced this technology with enthusiasm, enabling them to respond instantly to the concerns of constituents. The number of followers can also give a boost to self-esteem. Many politicians are desperate to be liked and to show themselves to be in touch with the present. Yet it is possible that they have confused their parliamentary majorities with numbers of followers.

Although there may be some overlap between constituents and online followers, the latter are self-selecting, tribal, and unrepresentative of any single real community which will always contain different voices and will always be self-regulating. In the past there has usually been a significant gap between what people think and what they say, social shaming operating as a powerful disincentive to threatening or abusive language. Social media has removed that filter. From the privacy of a home, anyone can now fire off a derogatory tweet, safe in the knowledge it will be supported by the in-group, unconcerned about the impact it will have on the figure targeted.

The Kuenssberg story also has much to teach us about contemporary attitudes to women in positions of authority. It implies that, for a vocal minority at least, successful women are still legitimate targets for abuse, that women who have broken through the glass ceiling can expect to be treated differently.

It was reported that the shadow chancellor commented: 'She should tell them that John McDonnell will sort them out.' This reaction is dispiriting on several levels. It suggests that it was down to Laura Kuenssberg to respond directly to the cyber-bullies; that she needed a man to sort out the problem; that violence was an acceptable solution. If correctly reported, this reveals more about the old-fashioned attitudes of the shadow chancellor than representing any genuine attempt to offer help.

At a deeper level, Ms Kuenssberg's experience reveals a retreat from reasoned discourse and a return to a more brutal form of political life, where personal abuse and threats of violence are once again viewed as legitimate responses. Modern opinions are formed through social media and online publications. The 'retweet' is rarely a considered action, more often an instant gratification for the need to be recognised and popular.

Admittedly more traditional criticisms have also been raised, implying for example that Ms Kuenssberg and her organisation are not impartial in their reporting of political events. Such tactics undermine her credibility and reputation as a journalist. None of these accusations need be true for them to be effective. But these have always come with the territory of being a highprofile journalist. The vitriolic nature of the present abuse, however, the deaththreats and descriptions of violent reprisal, these features are new.

How then should those trolling Laura Kuenssberg be challenged? To threaten them with prosecution is to arouse anxieties around free speech. To request the companies who own the online platforms to reveal the identities of those involved is to contravene current data protection laws. Perhaps the most realistic solution is to implore all commentators to be unanimous in their criticism of the abusers.

There should be no space in modern Britain for this kind of behaviour. It cannot and should not be condoned. It is only when the cyberbullies are challenged by women and men of every political persuasion that the threat may recede. Let us hope that this is the high-water mark in the objectionable and illegal pursuit of female journalists for doing their jobs. Enough.

The full list of winners and runners-up is available here.