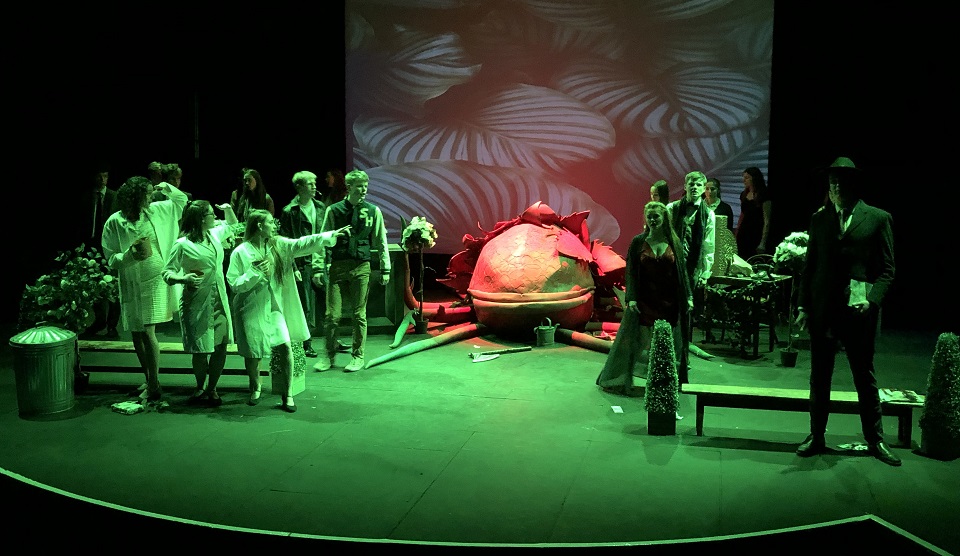 Senior School and Sixth Form pupils at St Leonards drew a crowd with their all-singing, all-dancing musical production of Little Shop of Horrors at the Byre Theatre in St Andrews.

The three-night run, from Wednesday, 20 February to Friday, 22 February, included a sell-out performance on the final night, with tickets selling quickly for the rock musical comedy classic, with an element of horror thrown in for good luck!

Weeks of rehearsals both in school and at the Byre Theatre resulted in a spectacular show, with the famous plant, Audrey II, taking centre stage.

Little Shop of Horrors follows the story of a talking plant, which has been displayed in the window of Mushnik’s Flower Shop in a run-down New York City neighbourhood, in a bid to attract more customers.

When one of the characters, Seymour, accidentally pricks his finger on the plant, he learns that it thrives on human blood (cue the horror!).

Highlights from the colourful and vibrant show included Kim Whatmore, who delivered an outstanding performance as Seymour, alongside Evie Hayward-Daventry who was convincing in the role of ditsy Audrey.  Their charming and rather ‘short-lived’ on-stage love story was never doubted, whilst Valentin Trenkwalder and Andrew Ford who shared the role of Olin did very well to capture the persona of the erratic and slightly unhinged dentist!

A special mention to Carolin Lohmann – her sultry and sassy tones as the bloodthirsty plant Audrey II commanded the audience’s attention with conviction, lifting the mood and tempting us onto the stage. Matthew Forrest must also be commended for his efforts ‘inside the plant’, making her move during every performance!