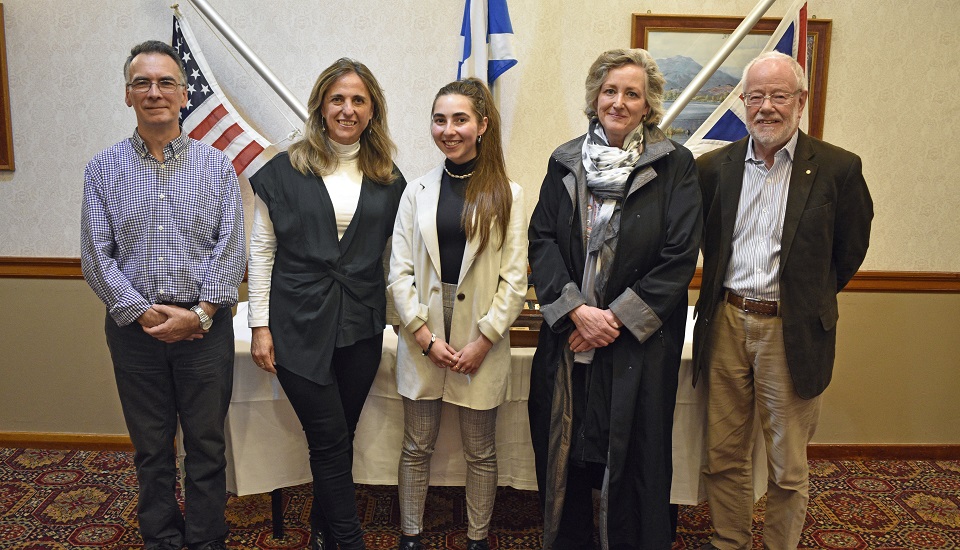 St Leonards student Nerea Gomez-Martin (Year 13), who was awarded a national photography prize for her inspired submission to the Rotary Young Photographer of the Year Awards 2019, addressed members of the Rotary Club of St Andrews, following her announcement as overall winner earlier this year.

Nerea joined members at The Scores Hotel in St Andrews on Wednesday, 16 October, where she spoke about her star entry in the competition, the theme for which was 'the beauty of nature'. She explained that her composition was taken during a walk along the Fife Coastal Path with her younger brother Pablo, also a pupil at St Leonards, and shows three photographs of lichen and markings on a seaside rock formation.

Sixth Former Nerea’s presentation also covered her wider interests in art, including sculpture and drawing, and explored some of her passions within photography, such as capturing nature, rock formations and fungi up close.

She finished by sharing her plans for the future. On graduating with the IB Diploma from St Leonards next year, Nerea, who also enjoys modern languages and environmental sciences, hopes to pursue a career in fashion design, bringing together her many and varied interests within art.

Also in attendance were Nerea’s parents and Head of Art at St Leonards, Donna Rae, who champions excellence and experimentation in photography at the school, encouraging pupils to enter the Rotary Young Photographer of the Year competition on an annual basis, with great success.

Thank you to the Rotary Clubs of St Andrews, Kilrymont and North Fife for their support, and for inviting Nerea to share her story and artistic influences.