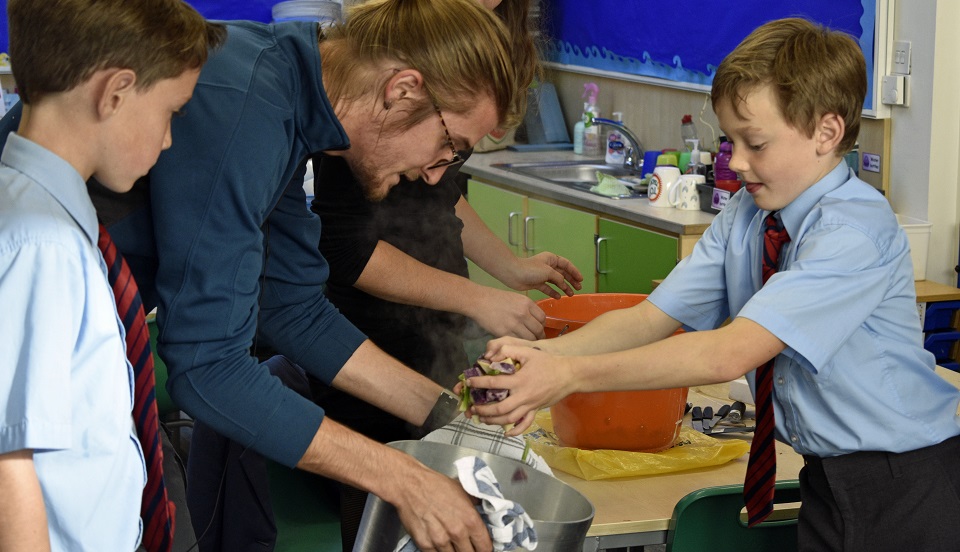 Year 3 revisited the Edible Garden at Albany Park in St Andrews this week, having planted seed potatoes and parsnips back in April with Miss Fisher.

On Tuesday, they made the return trip to harvest the vegetables they had planted. There was a brilliant crop of amazing purple potatoes, and even pink ones! The parsnips, too, were fabulous, and despite a dry summer the boys and girls were delighted to discover that they had grown very well.

Andrea, who helps at the St Andrews University Edible Garden explained that they would be best left to allow the shoots to die back, and a good frost over the winter would make them sweeter, so the class only lifted two for their pot of soup, and the rest will be left for the university students to lift for Christmas.

As well as harvesting their own vegetables, Year 3 picked kale, leeks, celeriac and found pumpkins growing as well. Just in time for Halloween!

The children weighed all their vegetables so that Andrea and her team could collate how much had been harvested. They then brought all their home-grown vegetables back to school.

It was a fun morning, with lots of team work needed in the digging and harvesting, as well as maths with the weigh-in.

On Wednesday, the outdoor learning continued with Year 5 using the vegetables to make a big pot of soup, whilst Year 2 baked bread on the fire pit.

Everyone enjoyed tucking into the homemade soup and bread in the Outdoor Classroom, and even our parents were treated to a taste when they came into school for afternoon pick-up!