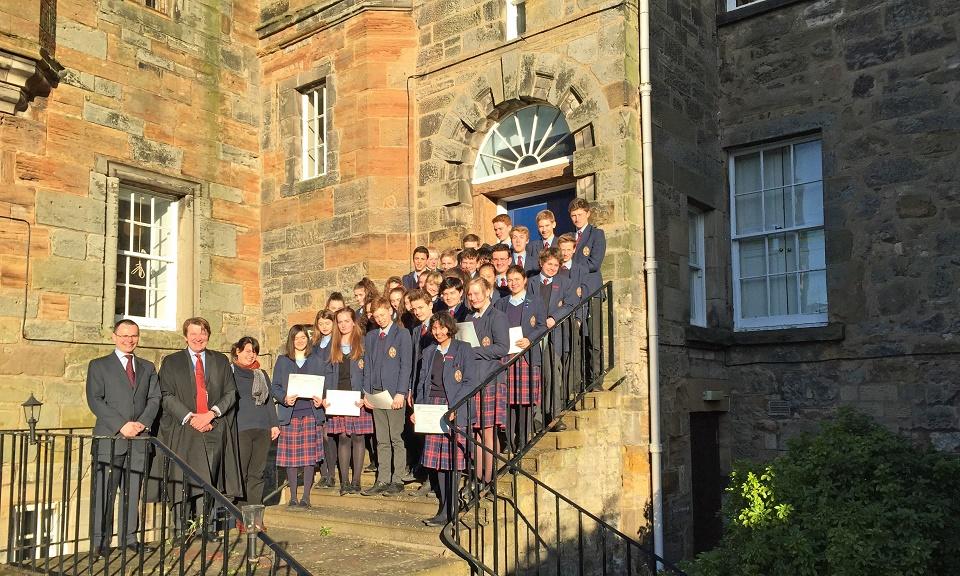 On 23rd February 2016, St Leonards were thrilled to welcome Emmanuel Cocher, the General Consul for France in Scotland to the school to present our DELF (Diplôme d’Études de Langue Française) exam certificates to our talented Year 9 budding linguists.

Since 1985, the DELF has been a world recognised certification for knowledge of the French language. It can be taken at the 6 different levels of the Common European Framework of Reference for Languages (CEFR) – A1, A2, B1, B2, C1 and C2.   This international exam is now part of our curriculum as it is a helpful way to document the progress of our students before they go on to sit their GCSE.

Last year, 27 St Leonards candidates were entered for the A1 exam (elementary level) and 11 candidates for the A2 exam (equivalent to GCSE level).  One pupil was even entered for a B2 level, which would equip them for entry at a French speaking University.  We are very proud to announce that every student passed their DELF exam with flying French colours, the top score being an incredible 96.5%.

Examiners feedback has also been positive, repeatedly commenting on how confident our Year 9 pupils are speaking French.  The class also found it to be a good experience and are very pleased that their French learning efforts have now been documented and recognised by DELF and indeed the leading representative of France in Scotland.

We hope to welcome Emmanuel again in the future to reward our next set of DELF examinees.